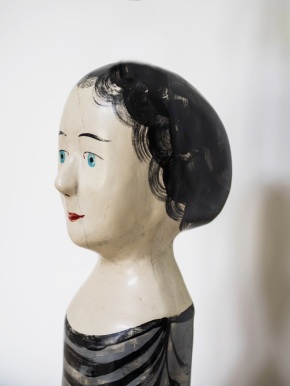 Thursday May 8  Went to Boston and walked around

all day trying to find a bonnet but could not get

one to fit me ready made. Engaged to have one

made of blue plaid silk at Alfred Remick & Co.

Went with Oakes Angier to call on Mrs Stevens

She spent the night with me at Mr Orrs

Julia was at home and a Miss Orr a cousin or hers,

was there & Miss Foule dress making

Evelina left off gardening today to go bonnet-hunting in Boston, for it was the season to switch from winter to summer headware.  She searched from store to store and must have visited a range of establishments running from small millinery shops to larger dry goods stores.  She would have seen bonnets displayed on mannequin heads such as the one in the illustration above.  Try as she might, however, she couldn’t find one she liked, so she ordered one instead.

Alfred Remick & Co was one of many dry goods merchants in the city. In 1851, Boston was a premiere center for the dry goods trade, according to the Boston Board of Trade, which reported years later that “according to our extensive New England domestic manufactures, Boston was from 1830 to 1850 the chief Dry Goods market of the country.” * Boston had lost that dominance by the outbreak of the Civil War and, with the ongoing and rapid settlement of the west, the competitive reach of rail freight traffic, and the impetus to widespread manufacturing brought on by the war, Boston never regained its preeminence.

Such concerns were not in Evelina’s mind, however, because she needed a new bonnet and couldn’t find one. After finally placing her order, she and Oakes Angier, the eldest son who carried her into town, called on a family friend, Mrs. Stevens.  As usual when staying in Boston, Evelina spent the night at the Orrs’ house.