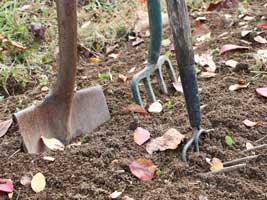 April 29 Tuesday  Frank has finished the beds in the flower

garden and I have set out some plants that Henrietta

gave me and some that I bought of Edwin Manly paid

him one dollar Julia here finishing the dresses for

& I went to Sharon and spent the afternoon

Had a pleasant ride with Dominic

Three spheres of activity informed Evelina’s day. First was gardening, made possible by Frank Morton Ames finally finishing tilling the soil in the flower beds.  He and others had been loosening the soil off and on for several days, which raises the question of how many flower beds Evelina had, and how large they were, and where they were situated relative to the house. Evelina “set out” some plants that she got on Saturday. One group came from her sister-in-law, Henrietta Lincoln Gilmore, at the Gilmore farm; she probably got those for free.  The other group from Edwin Manley, however, she had to pay one dollar for.

The second sphere of action was sewing, of course, which always seemed to be going on in center ring at the Ames house. Today Julia Mahoney, the dressmaker of choice, worked on a dress for Susan and a blue delaine, or light wool, dress for Evelina. The warm weather would soon arrive and the lighter dresses would be needed.

The last sphere was a nice change of pace – literally – for Evelina and her cousin-in-law, Almira Ames. With Dominic, a horse, pulling them along, the two women drove the carriage (or were driven) to nearby Sharon. Whom did they visit? Did they shop in the town?  The ride was pleasant, whatever the errand.