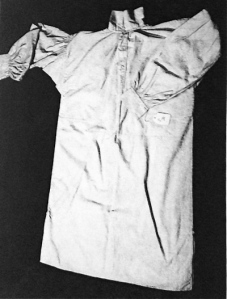 care of, and feel thankful to get rid of it  Orinthia

assisted me in doing the work this morning

Have been working on a shirt for Oakes Angier

Jane went out this afternoon to Mrs Willis to get

the evening with us.  A letter from Helen  She

is contented at her school  Cloudy & windy to night

Evelina solved the problem of keeping the coal furnace going by delegating the task to Ann Orel, the 24-year old Irish servant who worked for Sarah Witherell in “the other part of the house.”  It being Monday, and thus laundry day, Jane McHanna was occupied in the kitchen boiling water and washing and rinsing clothes.   Today’s load couldn’t have been too heavy, however, or Jane wouldn’t have been able to leave the house in the afternoon to see about getting a new outfit made.

Jane’s preoccupations left the usual morning chores to Evelina, who got a little boost of help from Orinthia Foss, the boarder and schoolteacher.  Orinthia presumably soon departed for the schoolhouse, however, and Evelina had to carry on alone.

She turned to sewing, naturally, as she did on most days. Interesting that so far this year, except for a bonnet, she hadn’t sewed on much of anything for herself. Most of the sewing had been shirts and mending for the men, and aprons and chemises for her daughter.  Evelina sewed almost constantly, but her production capacity was limited.  Even with occasional help from others, she didn’t produce a surfeit of any article of clothing.  Historians of this period – Jane Nylander, in particular – have suggested that people had much less clothing then than we might imagine:

“[V]ery few people had large numbers of any kind of garment.  Women seldom owned more than four or five gowns and petticoats at a time; men usually owned a few coats and pairs of breeches or pantaloons, a few vests, and perhaps as many as half a dozen shirts..  Both owned a few pairs of stockings […] one or two pairs of shoes and boots; and a hat or bonnet […] Nobody changed all of their clothes daily.”*

If the average grown male owned an average of six shirts, and there were four men under Evelina’s roof, she was responsible for producing and/or maintaining approximately twenty-four shirts at any given time.  No wonder she often sought assistance from Sarah Witherell and others.  No wonder she worked at keeping them mended.  No wonder the laundry load was so big on Mondays.

One lovely note today: Sarah and Oliver Ames Jr heard from their daughter, Helen Angier Ames, who seemed to be settling into life at boarding school just fine.  If she was content, then her relatives were, too.