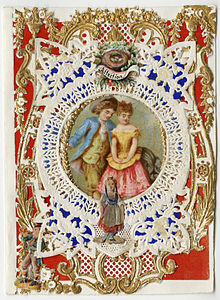 Valentine from the 1870’s by Esther Howland

cut out some work for Susan.  Went to the store for a

pair of shoes for self & Susan.  Called on Miss Eaton

on my return met the Dr there.  He thinks she will

live into March.  Has failed very much since I saw her

Passed the afternoon with Mrs Wales & Miss Lothrop in

the other part of the house.  Mr Jackson called here this eve.

The 19th century descendants of the Puritans weren’t known for their celebratory spirit, so we shouldn’t wonder that Valentine’s Day went unrecognized at the Ames’s house.  Although the practice of sending a sweet message to one’s beloved had thrived in England for several decades, the concept was just gaining traction in the United States. Personal Valentine greetings in the form of hand-written poems were familiar to many young people, but nothing was mass-produced until mid-century when a graduate of Mount Holyoke named Esther Howland, whose father was a stationer in Worcester, Massachusetts, developed and sold a lacy Valentine card, America’s first.  The idea took off and shortly thereafter, Graham’s American Monthly noted that “Saint Valentine’s Day […] has become, a national holyday.”   The idea hadn’t caught on at the shovel works, though; if it had, Oakes Ames probably would have seized the opportunity to buy one for his wife.

Evelina took a small step back into her social life today.  Not only was she able to call on Miss Eaton at the Holmes’s house, but she also got an update from the doctor, who confirmed that Miss Eaton was dying.  Miss Eaton did not yet have a “watch” on her, but the time would come when different friends and relatives would take turns sitting with her until she passed.

After her visit with Miss Eaton, Evelina relaxed into a sociable afternoon in “the other part of the house.”  With her sister-in-law Sarah Witherell, she chatted with two female acquaintances while rain returned outside.  In the evening, Mr. Jackson came to call.  He was probably the school master whose teaching had “lacked energy” last week when Evelina visited the local school.  Why was he calling?  Had he learned that Evelina was involved in the establishment of a private school?