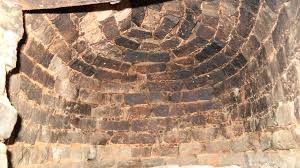 Feb 7th Friday  Have been baking this forenoon  Heat the

This afternoon have been cutting out stripped shirts

for sewing Circle  I partly cut them out at Mr

Whitwells, the afternoon we met there  There are ten of them

Baking today, lots of baking. Evelina shared a brick oven with her sister-in-law, Sarah Witherell.  It took so much concentrated fuel to keep the oven hot that they typically baked together, in weekly or bi-weekly batches, producing multiple goods to be served all week long. Yankee kitchen practice was to bake on Fridays and/or Saturdays, in preparation for the Sabbath day when no cooking was supposed to take place.  Sunday meals were taken traditionally from food that had been prepared the day before. That custom was fading by the 1850s, but the practical rationale for concentrated baking still held.

Even by this standard, though, today’s output was prodigious.    Three kinds of pie, brown bread, cake and ginger snaps suggests that more than family was going to be fed – and it was. Evelina’s turn to host the Sewing Circle was coming up, and she wanted to have plenty of goodies to offer her guests.

The afternoon sewing, too, was accomplished with the Sewing Circle in mind.  Evelina cut striped cloth to be made into shirts, something she had begun at the January meeting at the home of William and  Eliza Whitwell.  It was evening before Evelina turned to her own sewing, in this case underclothes for her daughter.