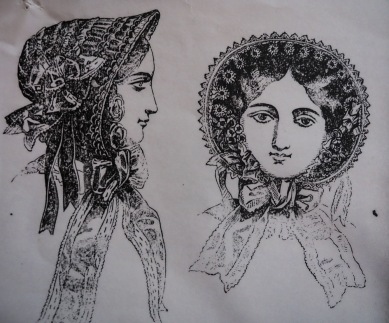 Feb 5th Wednesday  This forenoon made a head dress trimmed

much for my days work.  Have been doing a little

of everything & not much of any.  Jane has done

part of the ironing  Oakes Angier has been to Canton

to mark Iron  have been reading in David Copperfield

this evening.  I have been looking over my accounts

It is very warm for the season but cloudy

A ho-hum day for Evelina, warm but gray, and she still partly sidelined by a sore foot.  Small wonder that she chose a colorful project for the morning: trimming a head-dress, more commonly referred to as a bonnet.  She used red ribbons and fabricated flowers and although she deprecated her own handiwork, the task must have been a nice change of occupation.

In the 19th century, no lady’s outfit was complete without a bonnet; it played the accessorizing role that shoes and purses play today in women’s fashion.  Given that a woman’s form was covered from neck to toe by a voluminous dress or cloak, the bonnet was an inevitable point of interest atop the whole outfit.  Not only did it stand out like the star on a Christmas tree, it also served to cover hair that was seldom washed.  It rarely kept a head warm, however – that’s what cloaks with hoods were for.

Most women had at least two bonnets, one for winter and one for summer.  Winter bonnets were made of wool, silk or even horsehair, while bonnets for warm weather were typically made of straw or “chip,”  a fine wood splint.  As the 19th century progressed, the transition from winter to summer bonnet solidified around Easter, thus introducing the notion of the Easter bonnet and competition for the prettiest headdress on that important Sunday.

In other news of the day, Oakes Angier Ames rode to Canton on shovel business to “mark Iron.”  Does this mean he looked through a supply of smelted ingots to select the best for the Ames shovels? Anyone out there care to elaborate on what Oakes Angier did?  Was the Kinsley Iron Company the forge that he visited?  Certainly probable.