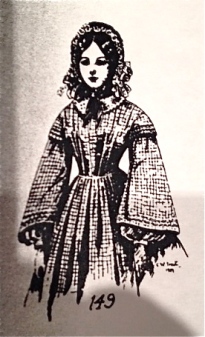 Jan 31st Friday  This morning sat down with mother quite early

to Mr Torreys.  I went about two & passed the afternoon

Called on Mrs Lothrop at Dr Wales, Engaged the

school house for O Foss to keep a private school.

Came home quite early & wrote her a letter.  Sewed

on Susans panteletts.  Very cold but not quite as cold as yesterday

Evelina and her mother, Hannah Lothrop Gilmore, sat together and sewed this morning.  After mending several items – there was always mending to be done – Evelina reworked the waist on a delaine dress, “delaine” meaning “of wool” in French.  It was a popular and durable fabric in this era.  But altering the waist begs the question, did she have to take it in or let it out?  And had she begun to wear her sleeves in the new “pagoda” style?

Augustus Gilmore, Evelina’s nephew and Hannah’s grandson, soon arrived and, once Oakes and his sons came home from the factory at noon, they all dined together. Augustus was close to his Ames cousins, and worked for the company from time to time.  After dinner,  Augustus accompanied his grandmother to the Torrey house in the village, where Hannah’s granddaughters, Abby and Malvina, lived.  Evelina joined them there a bit later, and paid another call as well, on Mrs. Lothrop.  There were many Lothrops in Easton, so we can’t know just which one Evelina visited.

We can know that Evelina was somehow involved in the setting up of a private classroom.  A young woman named Orinthia Foss, with whom Evelina corresponded, was due to arrive in North Easton to teach.  The genesis of this arrangement is a mystery. Was Evelina doing this because of concerns about Susies’ schooling?  Who else was involved? And who was Orinthia Foss? How was she hired?

Whatever the back story was on this new little school, Evelina took a bold step today when she committed to renting a schoolhouse.  She promptly returned home to write Orinthia with the good news.