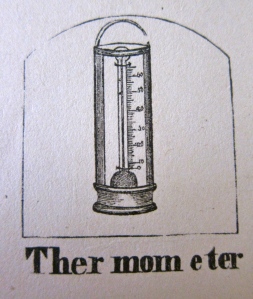 Mrs McHanna came home in season to get tea.  Went

most of the day.  She has a bad cough & is failing.

There was no church for the Ames family today.  Without the help of their servant, Jane McHanna, Evelina had to get breakfast and dinner by herself, and didn’t finish the preparations in time to get to morning service at the meeting house.   Oakes Angier, Oliver (3) and Frank Morton, perhaps seizing a rare opportunity, slept late despite their mother’s evident disapproval. The afternoon service, which the family also usually attended, was cancelled.

Truth told, Evelina may have been grateful not to make the two mile ride to church. The weather that day, according to Old Oliver, continued “verry cold,” reported at 14 below zero by “the Mr Pools” who lived several miles south of the Ameses. The Pools would know; they manufactured thermometers. Jane McHanna, meanwhile, had to bear the cold on her drive back from Mansfield, returning to North Easton in time to prepare tea.

Despite the cold, Evelina and  Sarah Ames paid a visit to a sick woman in the neighborhood. Calling on the sick was something that Evelina and her sisters-in-law often did. Although there were doctors in town, there was no hospital, nor was there a habit of placing the seriously ill in a hospital.  People were taken care of at home, by family, friends, and townspeople like the Ames women.  Miss Eaton was suffering from tuberculosis or consumption, as it was known.  Evelina, Sarah Ames, and Sarah Witherell visited her often, taking food and helping the family with whom Miss Eaton was living.