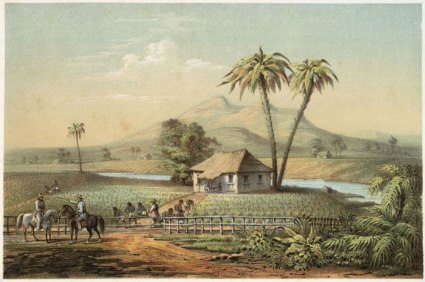 Tuesday Dec 7th  Have been mending and to work on

Oakes A clothes again to day.  Catharine has

gone to Canton and is coming back to night.

Edwin & wife were here this evening

and Augustus called has been persuading

Oakes A to go to Boston tomorrow

Evelina continued to work on Oakes Angier’s wardrobe. She must have been somewhat stymied to prepare for a climate so markedly different from her own. Oakes Angier would need warm clothes for the journey by water, but light clothes for his new life in Cuba. People in the middle of the 19th century generally had smaller wardrobes than today’s people in the same socio-economic class, but still, a variety of shirts, pants, jackets and undergarments had to be readied and packed. How did Evelina manage, operating as she did with so little knowledge of Cuba’s climate and social guidelines?

What did Oakes Angier know about Cuba, for that matter, other than its purported healthful properties? He may have known one or two people who had gone there, or perhaps was in hopes of acquiring a few letters of introduction. He probably knew that sugar plantations were a major industry, especially as Oakes Ames had a business associate, Elisha Atkins, who invested in sugar there. Not to get ahead of the story, but while Oakes Angier was staying in Cuba, he must have spent time on a plantation or at least visited one occasionally. The sugar business did pique his interest, because some twenty years later, after the Civil War, he and his two brothers would buy a sugar plantation in Louisiana. Surely the seed for that purchase was sown when Oakes Angier first saw sugar cane in Cuba.