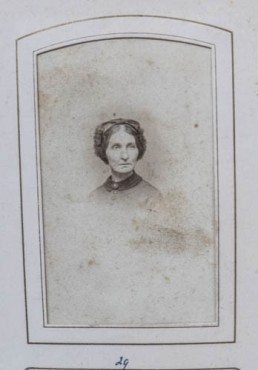 Thursday Sept 9th  This has been a very warm day indeed

and not much air stirring  We went in to see

Augusta awhile this forenoon and found her

rather more comfortable  This afternoon have

been sitting in the parlour chamber sewing it

Evelina and her father-in-law agreed that this day and the one before “were fair days + […] verry warm indeed.” Oppressively hot for September, we might think.  Evelina, her mother Hannah Lothrop Gilmore and her friend Mrs. Stevens went across the street early in the day to check on the ailing Augusta Pool Gilmore and must have been pleased to find her “rather more comfortable.” Back to the house it was, where the three ladies moved into the parlor to sew. Usually they would work in the less formal sitting room, but the parlor perhaps offered less direct sunlight. It was “the coolest place.”

Evelina’s sisters-in-law, Sarah Lothrop Ames and Sarah Ames Witherell, paid a call. It was Sarah Witherell’s 38th birthday. A widow for only four years, her most recent year hadn’t been a happy one: she had burned her foot badly, had all her teeth pulled, lost her elderly father-in-law and, most awful of all, lost her fourteen year old son, George, to rheumatic fever. Yet she was moving through the proscribed stages of real mourning in a seemingly graceful way. She was still taking care of her father, Old Oliver, and her one remaining child, Emily, and was ever helpful around the family compound. As we see from the diary entry, Sarah had spent the previous night watching over the dying Hannah Savage. “Dignified,” is how one family friend described her, and we readers might add “dutiful” and “kind” as well.

In another decade, after her father had passed on, Sarah and her daughter Emily would move into Boston and take up residence there at the Hotel Hamilton. Sarah would continue in a quiet way to participate in both family and city life, and would enjoy traveling with her sister Harriet. Her brother Oliver Jr would make it a point to look after her.