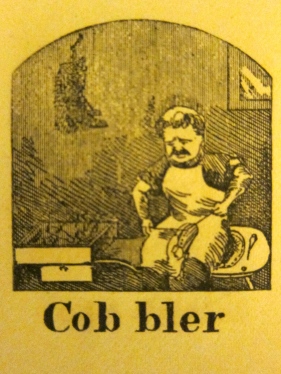 Thursday April 22  Worked a very little in the garden

not very pleasant but looks more like fair weather

Sewed a little on my black silk dress

Called with Augusta on Hannah & her sister

A Pratts Holmes and at the store.  afterwards at

A little sewing, a little gardening, and a great deal of socializing filled the hours of Evelina’s day today. After being pretty well pent up by several days of stormy weather, Evelina was ready to go out.

With her niece-in-law, Augusta Pool Gilmore, she called on another niece-in-law, Hannah Williams Gilmore. There they met Hannah’s sister, Sarah Lincoln, who was visiting from Hingham. They went on to see yet another niece, Abby Torrey, then to the homes of Willard Lothrop (one of Easton’s most active spiritualists), Joel and Martha Sampson, and others.

The Sampsons were a younger couple from Maine with five little children aged eight and under, including three-year-old twins. Joel Sampson worked at the shovel shop and was evidently devoted to Oakes Ames. Twenty years later, on hearing of Oakes’ death, “Joel Sampson, teamster and farmer of the company came home when he heard the sad news, threw himself upon his sofa and announced to his wife that the head and soul of the business was dead, that every thing would go to smash now, and told her to make ready to go back to their old farm and home in Maine, as it was no use to live here any more.”**

Throughout her travels today, Evelina carried a pair of shoes to be mended. In an area of the country well known for its shoe manufacturing, there must have been a good cobbler somewhere in town.