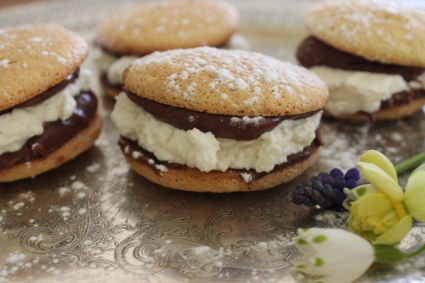 A modern version of a mid-19th century specialty: Kossuth cakes*

Ann Clarke came to the other part of the house

I went in to see them and staid to tea.  Spent

the evening at Willard Lothrops.  Called at Mr

It was a big baking day, with Evelina preparing a typical selection of pies, cakes – “plain and currant” –  and ginger snaps.  New to her repertoire was a Kossuth cake, a baked sponge cake with a creme center.

The Kossuth cake was named after the Hungarian political figure (and, briefly, president,) Lajos Kossuth, who was then taking refuge in the United States while trying to raise support for a return to power. During Kossuth’s visit to Maryland, a street vendor in Baltimore named a new baked confection after the hero, who was much feted as a champion of freedom.

The dessert became popular but is largely forgotten today, though the confection can still be found in parts of the south. Naturally, additions and variations to the recipe arose almost immediately, most involving the addition of chocolate poured over the top. A typical modern recipe looks more like a double sugar cookie filled with whipped cream and chocolate frosting than a creme-filled loaf cake.