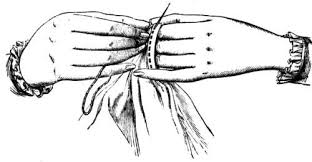 Thursday Feb 19th  Have been to work on Olivers clothes getting

them ready to go back to school  Have spent the

whole afternoon mending a coat for him which he

has spoiled wearing it in the shop  Augusta was

here this afternoon did not stop to tea.  Lavinia called

came up to bring Mrs Lothrop & son to Willards

Susan & self have spent the evening at Willards

Oliver came after us about nine Oclock

Finally, Oliver Ames (3) was going back to Brown. He had been home in North Easton, on a break, since January 21st. Evelina had her hands full mending a coat “which he has spoiled” so he could take it back to Providence. He wore it while working at the shovel factory and damaged it somehow. There was no time – and probably little inclination – to get a new one made for him. His mother had to fix it.

As Caroline Healey Dall, a contemporaneous female in Boston during this era, commented at one point in her mid-19th century diary, it was “a lonely, dull day – stitch, stitch, stitch.”* For most of the 19th century, all women sewed, and sewed often. Sometimes sewing was fun or companionable or rewarding; sometimes it wasn’t.  It was more often a necessity, a chore, and for Evelina today, the uninteresting and obligatory side of sewing prevailed.

Fortunately, Evelina had a few visits today from her younger female friends and relatives to help the time pass. Augusta Pool Gilmore visited in the afternoon – possibly with her own needle in hand – and niece Lavinia Gilmore called, having come into town from the family farm. In the evening, Evelina and her daughter Susan spent the evening with one of Easton’s more eccentric characters,Willard Lothrop, a medium. Oliver Ames (3) “came after” them after dark, probably anxious that all was ready for his return to college in the morning.