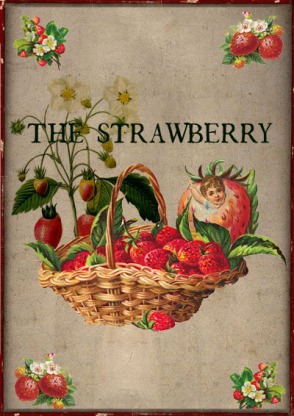 Sunday 22nd June  Have been to meeting to day Heard two

home with us to spend a few days.  Since meeting

mother Mr Ames & myself rode to the ponds and to

Mr Manlys garden  Mother was delighted with her ride

seemed to enjoy it as much as a child  When we

returned we found Emily sick  She is very much

Went to Mr Horace Pools at noon for strawberries

“Doubtless, God could have made a better berry, but doubtless God never did,” was a well-known remark about strawberries made in the 17th century by William Butler. Unlike today, when modern agriculture has developed a system that brings us strawberries any time of year, in 1851, the fruit was still strictly seasonal and short-lived. Strawberry season was much looked forward to.

Horace and Abby Pool evidently had a good strawberry patch at their home in south Easton, to which they invited a few fellow parishioners during the intermission at church.  Had the strawberries already been picked, or did folks wander through a strawberry patch in their Sunday finest, a la Emma Woodhouse at Donwell Abbey? Was the fruit served with cream and sugar, or taken home to be eaten later?

The fine day continued after church when Oakes and Evelina took old Mrs. Gilmore for a ride north to see the ponds and visit Edwin Manley’s garden. On a less delightful note, Sarah Witherell’s daughter, Emily Witherell, suddenly took sick. “Out of her head,” Evelina described her, suggesting perhaps that Emily had a high fever. The doctor was called.